Today is extra special for me. First, Em Stevens and Jea Hawkins are here. Woot!

Second, they did all the work. Em and Jea had a chat about League of Lesbians, a story they co-wrote.

Before you read the interview, I want to announce they’re giving away one copy of League of Lesbians to one lucky winner. You can enter the contest below.

Do you know what feels good? Asking an author you admire to co-write a series with you. But the thing that feels even better? When, through connecting and brainstorming, you find you aren’t writing a series with a fellow author– you’re writing it with a friend.

I’m super pumped to be interviewing Jea Hawkins for this blog post, not only because I love her books, but because she’s a rad, rad woman and I want to be her when I grow up. Hey, I said “super pumped” and this is about superheroes. Ha!

Em: What did you think when I first contacted you on twitter about this idea?

Jea: I thought, “ME? Why me? Em’s a much better writer than me. I’ll just bring her down…” *nibbles lower lip* Then I thought, “But maybe I’ll learn some new stuff. And superheroes? Oof… too fun to say no!”

Em: You’re crazy. I was e-stalking you because I loved your books so much! I was hoping to ride your coattails, if I’m being honest.

Jea: Well, I do have some nice coattails. But when you put out Critical Hit, I think I fell in love.

Em: Who’s story are you the most excited about writing? Why?

Em: Why do we enjoy bad girls so much? All of my favorite female characters are rule breakers.

Jea: I think it’s because we get tired of always doing “the right thing.” I don’t know about you, but everyday I wake up with a list of “shoulds” in my head. I should do the dishes, feed the cats, drive at or below the speed limit. Sometimes we get tired of the shoulds. Being good all the time is not just boring, it’s actually exhausting! Women are trained, in a way – by society – to be martyrs. Wait, am I getting too soapboxy here?

But, seriously. We’re the ones expected to give and give, to compromise, and blah di blah blah blah. Sometimes, we have to say no to the PTA or extra hours at work or being a shoulder to cry on for that needy friend who always takes, takes, takes. And sometimes, we have to say, “I don’t give a fuck,” and blow off some steam. Therefore, villains are seductive for that reason. They put themselves first. It’s a lesson we could learn. In moderation, at least!

Em: Holy smokes, Hawkins! That’s such a good answer and so true. It really is the selfishness that’s enormously attractive.

Em: What are some of the challenges of cowriting? Some of the benefits?

Jea: The challenges are getting over this fear of someone else being a better writer *coughEmisbettercough* and also making sure everything flows seamlessly. But the benefits are having someone else to share the heavy lifting with you, to look it over and critique your work, to share ideas, to complain when the caffeine is wearing off… Gosh, I could go on.

Em: Totally. Right now, flow is my biggest worry. But when we talk the story, it seems to mesh each time, so I’m confident we can pull it off. And if we fail completely, then at least we’ve made a lasting friendship, and that is worth almost as much as book sales. Ha! Just kidding, it’s worth way more.

Jea: I don’t know… I mean, Catwoman would disagree. It’s all about the meow-ny. Just kidding. I love talking with you almost every day! You feel my pain.

Em: If you could have any superpower, what would it be and why?

Jea: Telekinesis. I’ve wanted telekinesis since I was 14-years-old and creating my own superheroes in high school. It would be so cool to move stuff with my mind, not to mention throw bad guys around.

Em: Telekinesis is always a favorite. I’d probably want rapid healing like Deadpool or Wolverine or (swoon) Claire Bennet. I KNOW YOU HAVEN’T WATCHED THE FIRST SEASON OF “HEROES” YET. Do it. Trust me.

Jea: Can I watch it after I try Supergirl? I swear, it’s on my list!

Em: Yes, but I will be a nag until then.

Em: Have you seen the ongoing Poison Ivy/Harley Quinn lesbian arc in the Batman comics? They are in a folk band together. It’s crazy adorable and weird. I’m excited that DC is basically letting writers write fanfiction and publishing it as a run.

Jea: This is where I admit I’m not a fan of D.C. comics with the exception of Death: The High Cost of Living. MARVEL ALL THE WAY! That said, I can kind of see it. I mean, other than the fact that Poison Ivy and Harley Quinn wouldn’t be able to kiss. And Poison Ivy could never go down on Harley… Jeez. What a horrible idea. Now I feel really bad for Harley Quinn.

Em: I didn’t think of that! They definitely do kiss. Maybe Harley uses a wax lipstick? And dental dams? Where there’s a will, there’s a way.

Em: If you had a superpower, would you wield it for good or evil?

Jea: I plead the fifth.

Em: I think we should get matching tattoos after this to celebrate. League of Lesbians for life. Am I crazy?

Jea: Not at all crazy. My right arm still has bare skin that needs inking. Let’s do this!

Em: How would you wrap up this blog post?

Jea: I think we should do some sort of superhero pose, but in that Charlie’s Angels silhouette way, you know? And maybe a big Batman-like “KABLAM!” behind our shapes.

Psssst… Don’t be fooled by the pretty purple cover. This isn’t exactly a “happy” story.

What is it, then?

It’s a story about six friends and the night that changed their lives forever. It’s the foundation for tales of hurt, tales of revenge, and tales of love. Oh yeah, there are some bad-ass women with super powers, too. But all heroes have to start somewhere, right?

This is the origin story of the League of Lesbians. 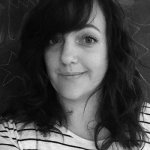 Em Stevens got a MA in Liberal Studies, but she can’t tell you what that means. She’s worked all sorts of jobs, from cashiering to peddling vitamins to building airplanes. Now she lives in Raleigh, NC with her family and writes about the things she loves: Romance, Happily Ever Afters, and Games. 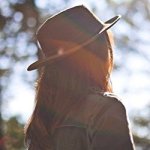 conquers all, then she’d like to think her heroines can rule the world one day. An east coast transplant to the Midwest, she loves to write about complicated women and settings that feel like home.

Personal addictions include autumn, cozy sweaters, hot chocolate, and the Sims 3. She’s both an avid reader and gamer, and hopes readers don’t mind a few geeky references here and there in her work.

Here’s your chance to win a copy of

Enter to #Win the #Lesfic Superhero Story League of Lesbians

Thanks Em and Jea for stopping by I Heart Lesfic today and for doing all of the work!

Good luck to everyone who enters the giveaway.

One last thing before we go.

Want to be a hero? Click here to find out ways you can help people who have been affected by Hurricane Harvey.

TB Markinson is an American who's recently returned to the US after a seven-year stint in the UK and Ireland. When she isn't writing, she's traveling the world, watching sports on the telly, visiting pubs in New England, or reading. Not necessarily in that order. Her novels have hit Amazon bestseller lists for lesbian fiction and lesbian romance. She cohosts the Lesbians Who Write Podcast (lesbianswhowrite.com) with Clare Lydon. TB also runs I Heart Lesfic (iheartlesfic.com), a place for authors and fans of lesfic to come together to celebrate lesbian fiction.
View all posts by TBM →
This entry was posted in Giveaway, Interview, Lesfic Author and tagged Em Stevens, Giveaway, Jea Hawkins, League of Lesbians, Lesfic, Lesfic Authors, Superhero. Bookmark the permalink.

This site uses Akismet to reduce spam. Learn how your comment data is processed.